I’ve never really been much of a PC gamer - growing up, I mostly played on various Nintendo consoles. I recall trying to build a PC back in 2014, and giving up due to how expensive it was (I was still a student at the time). Somewhat ironically, the build that I specced  out at the time would cost about the same today, due to the GPU market being what it is. Phones at the time weren’t really powerful enough to do nearly as much as they can today - I recall playing a few Gameboy games on an emulator for my Nexus 5, along with Angry Birds.

Recently, I thought I would try playing Genshin Impact . I tried running it on the fastest hardware I currently own (a refurbished gaming laptop from 2015) but I was unable to get over 12 or so FPS even on the lowest settings. That machine has an i7 4720HQ, 16GB of DDR3 ram, and an Nvidia 860m. I figured I would try and run it on my current phone (Redmi Note 5), as Genshin is also on Android. Unfortunately, my phone isn’t supported, and even if it were I highly doubt it would get anything close to playable on a four year old budget phone.

I considered buying a console as well - the market for a Switch OLED or a PS5 however seems to be dominated by scalpers, so I figured that wouldn’t be an option. Trying to get into gaming during a pandemic after chip shortages have become common isn’t easy.

I’ve also been getting more and more interested in emulation of the Nintendo consoles I’ve owned - specifically 3DS, DS, and the Wii. To my surprise, on Youtube folks were able to run Wii games just as fast as the original, on Android phones. I figured I’d buy a phone just for playing games, without upgrading my current phone. Below are a list of requirements and notes that I used to decide on a phone to buy.

That’s quite a few requirements, I know. Thankfully, a couple of them narrow down the available choices a lot. Most of the Chinese phone manufacturers do not do video over USB C, so I excluded companies like Xiaomi, Redmi, Oppo, and Realme.

Point 6 is the most interesting one. To emulate many titles, a Snapdragon processor is preferred as it tends to get the best performance for emulators. If you have a Mediatek or Exynos CPU you often need to download and run a patched emulator (such as Citra MMJ instead of Citra) for playable frame rates. More specifically for Point 6 though, it seems that a Snapdragon 845 and up would be able to get me the performance I’d want.

Point 1 also cut out many other options. A Samsung Galaxy S10, a three year old phone, still goes for $200-$300 used. There are a few other tricks that one can use to find a cheaper phone. One is to add “bad imei” or just “imei” to the search. These are phones that have been blacklisted by a cellular provider, so while they don’t function as a cellular device they still can work over Wifi for gaming. Of course, for a phone to be blacklisted, the owner either lost the phone, had it stolen, or didn’t pay the cellular company. A second trick is to try and buy a “demo” unit phone. This can be a hit or a miss - demo phones can be an entirely different model, missing a cellular connection, having reduced storage, or other caveats. I’d only recommend this if you’re able to find others who’ve reported on the status of demo phones.

Eventually, after digging into the flagship phones that had launched in 2018 and 2019 I was able to at least settle on a company: LG.

LG made some very standard phones that would usually have a gimmick to encourage the buyer to purchase the phone. And yes, I said made . LG has closed their smartphone division, which is part of the reason their flagships can be found on sites like eBay for cheap, around $120. In the end, I was deciding between the LG G8 and the LG G8x. The G8’s gimmick is being able to control certain things in the phone with your hand, and the G8x’s gimmick is a case that includes a second flip out display. Both can be found for around the same price on eBay and have largely similar specs as far as performance goes. The G8 is lighter and slightly smaller, while the G8x has a lower display resolution.

In the end I picked the G8 purely because it was lighter, and ordered it. I’ve had the phone for a couple of days now, and I’m pretty happy. It met all of my requirements, and cost me $130 (after tax). There weren’t any with a bad IMEI that were worth it, and the demo units seem to have a quirk where only a few GB of the 128GB is made available to the user, so I skipped out on those.

Additionally, I picked up one of those telescoping bluetooth controllers that fit many phones, and look a bit like a Nintendo Switch. The specific model I used is a Saitake 7007F1, but there are many. If you care a lot about latency there is also the Razer Kishi, a more expensive option. I wanted something I could still use with stuff other than a phone though, so I stuck with bluetooth.

Here’s a quick photo of the device. 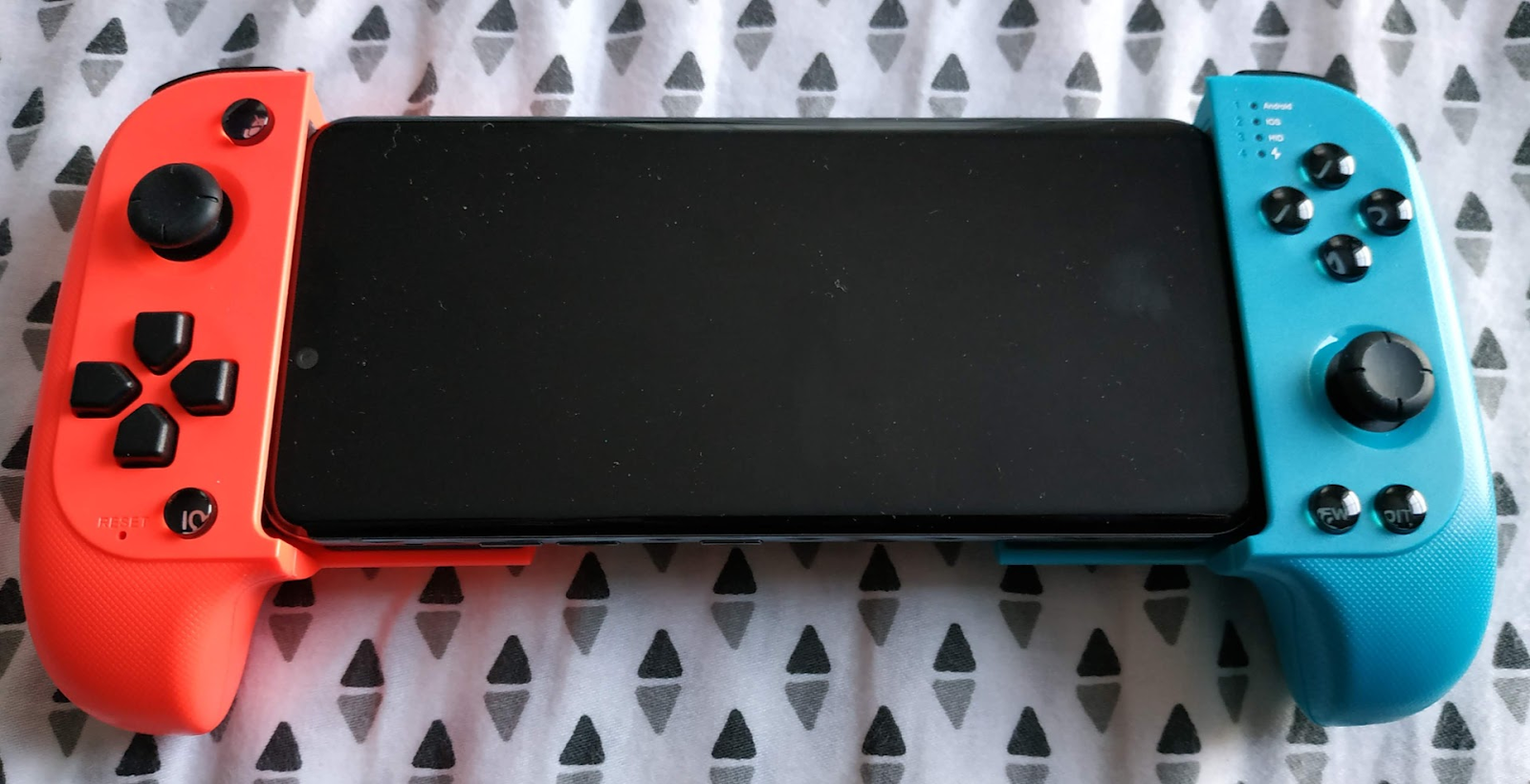 Pretty impressive to get a 1440p OLED display, with stereo speakers, that can play modern gaming titles all for less than $150! I hope that this was helpful to anyone else looking to do something similar.